When Haitian-American emcee O.B.A.$. (Only Believers Achieve Success) was about six years old, his mother sent him to their homeland to spend the summer with his grandmother. Unbeknownst to them, that visit would coincide with the U.S.’s embargo against the small country in the 1980s. “Embargo means nothing comes in, nothing comes out,” says O.B.A.$. What they thought would be a three month visit, became a three year stay.

Of his time in Haiti he says, “It’s 100 degrees. Tropical weather. Sometimes it’s no food. Grandma taking grains of salt and just putting it under your tongue and sending you off to school. Gunshots every night. That’s a real thing in Haiti. There’s so much political turmoil that the average man becomes a thug by nature.” Being exposed to the extreme poverty and violence in Haiti as a young child would change the Danbury, Connecticut-based emcee forever.

Early exposure to some of the worst parts of life formed an innate toughness as well as a sense of empathy in O.B.A.$. His family struggling to make ends meet–he was the third youngest of ten children–led him to the streets. And being a 6’4” 300 pound athlete in high school gave him a presence and a flair for the spotlight. All of these qualities are evident in O.B.A.$.’s approach to music.

Beginning his professional career in 2005, O.B.A.$ first made a name for himself on the Connecticut battle rap circuit. He quickly racked up several wins in a row, and gave his career some early momentum. Still, without any big name cosigns or backing, O.B.A.$. understood that he would have to make a way for himself. “I think once you change how you look at the world, and look at yourself in the world, and what’s required of you as a person, as a man, and as a human being, you boss up in a way,” he explained. In 2006, he started his own record label, which he owns and operates to this day. In addition, he also consults other artists on how to make the most out of the music industry.

After sharpening his skills in the battle circuit, O.B.A.$ decided to focus on his own artistry.

Like his early influences, Scarface, Biggie, and Tupac, O.B.A.$. uses personal experiences to connect with the listener. When describing his process, O.B.A.$. elaborated, “If you give me about an hour of your time, I’m gonna sit down and tell you my story. I’m gonna tell you the pitfalls of what happened to me and when you leave here you can make the decision to do what I did or you can do better.”

The Connecticut native doesn’t glamorize street life, he paints a realistic picture that rings true for those who lived it and warns those who didn’t. On his 2018 release “Concrete” he describes his time in the streets as “Doing wrong praying for right, we was just trying to eat. Never forget our upbringing, we came from the concrete.” On “Incentive To Win,” he implores folks who are still in the streets to clean up their money and contribute to their communities in a positive way: “To my hustlers on the street that are still ducking narc/It’s better ways you can get up your mark/Everybody put a dollar in the pot, we can all buy the block and have ‘em pay us rent for the shops.”

O.B.A.$. Is a versatile emcee, that combines substantive subject matter, battle-tested lyrical ability, and legitimate street credibility. When asked to describe how he wants people to feel after listening to an O.B.A.$. album, he replied “One word: inspired. You’re gonna feel inspiration. I came from the bottom. I made mistakes, but I never let it hold me back. I never made excuses. I keep fighting.”

Hold Up! I've got an exclusive download for you. 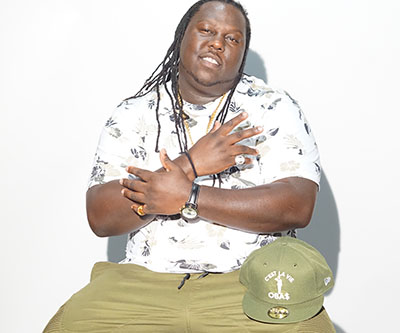 Make sure to leave your name and email for an exclusive download and keep up with all my latest news.

Thanks! C'est La Vie!
Your information will never be shared or sold to a 3rd party.